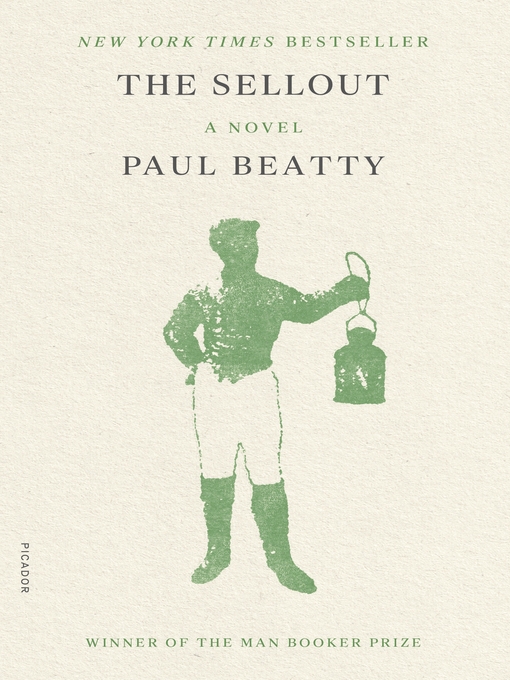 I listened to this on tape during a two-drive. Great humor and story.

"The Sellout" is a perfect read for those who love dark, witty satire; but reader beware this dense comedy is not for someone looking for an easy laugh or a quick read. The layers of humor, history, and commentary in this masterfully written work demand time to digest.

This book is easily one of the sharpest and wittiest books I've ever read; every page is armed to the teeth with satirical quips and biting one-liners. "The Sellout" is a deeply funny and introspective work about race in America's current """"""post-racial""""" political climate. In some ways, the thick layers of pop-culture references, larger-than-life personalities, and narration style in Paul Beatty's writing reminded me - in some sections - of Junot Diaz. Sardonic, thought-provoking and unbelievably funny: highly recommend.

Disappointing because it starts out seeming like a really fresh and interesting story, but just devolves into too much needless despair and gets boring. It's hard to explain because I was hoping it would be a new perspective on modern day life for Black Americans, and it has it's moments, but ultimately it just has a mismatched tone.

I didn't really find it all that funny, more sad than anything. The author tries to be too clever in my opinion and it just doesn't read well.

Similar to some who've commented, I felt Beatty's take on racism in America is brilliant as is the manner of storytelling. The plots are fascinating, characters outlandish, humor the laugh out loud type. The vocabulary of a PhD, wit beyond measure, Paul Beatty is one of the most gifted authors I've encountered. Having grown up in a ghetto, the notion of the "Dum Dum Donut Intellectual Club" is a paradox and funny as heck in its own right. Adding Hominy's Young Rascals stories and desire to be a slave, its a formula for F-U-N! The sheer notion of a farmer in a So LA city is one thing. Adding in the antics, insights his psychologist father handed down while home schooled and those from the others, its one of the more unusual stories ever written. Highly recommended for those who enjoy high brow, outrageous humor, with a dash of ghetto.

Good satire of race and a father-son relationship.

Set in the L.A. suburb of Dickens, "The Sellout" is a darkly funny satire of race, racism, and the myth of the post-racial dream of the Obama era. It's a book in which the narrator tries to re-segrregate schools and bring back slavery. . Beatty is self-consciously embracing certain cliches and stereotypes about race and black Americans only to demolish them. Despite its ambition and distinctive, sardonic voice, there was something about it that I found a little hard to get into, which I can't quite put my finger on.; maybe the coarse language. Still, I'd recommend this to anyone interested in satire and race relations.

This is a superbly written book. One of the best American authored novels I've read in a long long time. It's witty and brilliant, clever and insightful. The author has captured current American culture and suggested a discussion that the country is needing - what is the culture of the black person in America.
This book will be taught in universities, I predict: in anthropology courses, literature courses, political science courses; and it will be appropriate in each place.
I did not find the book vulgar in any sense of the word; rather, I found it honest and direct.

This book was hilarious, great writing, great social commentary. It's definitely vulgar but, you should be used to it if you're familiar with the works of Dave Chappelle, Richard Pryor, and Paul Mooney. The book reads similar to satirical movies and shows like "Family Guy", "Don't Be A Menace", "I'm Gonna Git You Sucka", or Chappelle's Show.

Have Google, Bing, or Wikipedia close by because there will be plenty of linguistic, historical and pop culture references that you'll need to understand to get the joke. There are also public figures and events that he describes to a "T" but does not mention by name, so it's even better if you can relate or have seen some of the mannerisms and ideas at work in real life.

I expected the ending to be more profound or have a hard-hitting social commentary but instead it summarizes the underlying motives of the characters throughout the book and brings you to a "soft landing". I was somewhat disappointed in the ending, but I enjoyed the ride getting there so I still give it 5 stars.

vulgar from the very first few pages, and with a vengeance, plus with too many derisive comments about people, I had an uncle like that, not especially impressive, despite some erudition - couldn't get past page 4

You have to get a copy of this book and read it NOW! The Sellout is by far and away the BEST book I've read all year. Paul Beatty is brutally funny; I had to read this almost straight through and there were many times that I'm sure the neighbors thought I was nuts, I was laughing out loud and long.

Wow. Did you guys get the same book I did? The cover looks the same but I'm fighting my way through the Prologue (which is 24 pages long) and it's like sitting in Latin class in high school. I'd rather be anywhere but here.

Brilliant! Prose that crackles, metaphors that'll blow your head off, a story that spirals like a wobbling top. What Hunter Thompson did for drugs and DFW did for America's obsession with amusement, Beatty does for race--in the most unusual of ways. Read this book! Howl away!

I was ready to love this one but alas... I found the premise intriguing but the characters flat, despite how truly interesting they are. With that being said, there is no denying that Beatty is a skilled (and humorous) writer, and I recognize that this title will surely spark some good conversations about racism. So while it was not for me, I do appreciate it.

An African-American farmer in southwest Los Angeles County decides to put his town back on the map with the help of his slave, who was one the lesser known Little Rascals. Open a 7-ounce bottle of Coke, peel a Satsuma and take a seat on Marpessa's #125 bus for this wild takedown on racism. Head-shakingly wry and laugh-out-loud funny. Winner of the Booker Prize and the National Book Critics Circle Award.

Terrific writing. A gag a minute. An important topic, of course. The story and characters are thin though.

I thoroughly enjoyed this book. It is well written and witty. I laughed out loud and shook my head throughout "The Sellout." Beatty's prose is poetic at times.

"They say 'pimpin' ain't easy.' Well, neither is slaveholdin'. Like children, dogs, dice, and overpromising politicians, and apparently prostitutes, slaves don't do what you tell them to do."-Paul Beatty, "The Sellout"
One of 2016's most acclaimed and provocative books, Paul Beatty's novel "The Sellout" won the Booker and a spot on the NYT Book Review's 10 best books of the year list. Set in the L.A. suburb of Dickens, "The Sellout" is a darkly funny satire of race, racism, and the myth of the post-racial dream of the Obama era. It's a book in which the unnamed narrator tries to re-segrregate schools and bring back slavery. One review below called it a minstrel show, which I don't think is fair. Beatty is self-consciously embracing certain cliches and stereotypes about race and black Americans only to demolish them. Despite its ambition and distinctive, sardonic voice, there was something about it that I found a little hard to get into, which I can't quite put my finger on. Still, I'd recommend this to anyone interested in satire and race relations. I'd also suggest watching Spike Lee's problematic, but fascinating "Bamboozled" for a similar satire of race and racism.

This book needs six stars to do it justice. Reading first The Sympathizer and now this, getting a rich education in novel form is a fine way to learn.

Agree with all the comments that it is a dense and original satire on current state of race relations based on an African American living in an isolated LA enclave (near West Inglewood? Mexican & African American residents, near surfing beaches, El Segundo, west end of Rosecrans Ave. and Manhattan Beach were cited often) decided to segregate his neighborhood and wound up sued by his diseased father's intellectual peer all the way to the Supreme Court as a "sellout." Loaded with humor and as commented by "staciegrant," highly quotable. My only gripe was some of the sentences were lengthy and crammed with litany of racial surveillance that took effort to digest thoroughly. However, not unlike the style (less the slang) in "The Sympathizer," winner of the 2016 Pulitzer Prize for Fiction.

I spent the first half of this Booker-Prize winning book being angry at its American swagger, showoffiness and shoutiness. It was almost exactly half-way through that I started laughing, and then found myself chuckling away at various points to the end. I don’t read a lot of satire, and it’s a rather wicked pleasure when I do.

The un-named narrator, living in a post-Obama time, is African American and lives in Dickens, a lower-middle-class suburb on the outskirts of Los Angeles. His home-schooled upbringing had been unconventional and overseen by his sociologist father who seemed determined to visit on his son all the most ethically-controversial psycho-social laboratory experiments of the twentieth century. After his father’s death, the narrator drifts into his father’s circle of old, idle chatterboxes who he dubs “The Dum Dum Donut Intellectuals” and tries to hook up with an old flame. It is while he is wooing his bus-driving love-interest Marpessa that he jokingly starts off re-segregation on her bus (yes, re-segregation, not de-segregation) and, discouraged by the neglect of Dickens as a suburb, initiates a broader grass-roots program of resegregation throughout the suburb that actually works. School results improve, crime declines, civic pride burgeons – all because of a self-imposed segregation.

It’s all very slick and clever and the book would probably easily reward a second reading. The blurb on the back describes it as “a powerful novel of vital import and an outrageous and outrageously entertaining indictment of our time”. Which is probably true. But I still think that it’s better recognized under the New York Times Book Review (as it was) than as winner of the Booker Prize.

See the rest of this review at:
https://residentjudge.wordpress.com/2016/12/08/the-sellout-by-paul-beatty/

There are quotable lines on every other page. Wise and well written, it's a thought provoking farce that stays with you long after you finish.

kind of a minstrel act, enabling whites to laugh at Negroes . so many whites find this amusing, and consistent with their prejudices.