Saved Searches Advanced Search
Our telephone service provider has alerted us of an outage due to recent storm activity. We are unable to receive calls, but you may reach us by email or chat while service is being restored.
Print 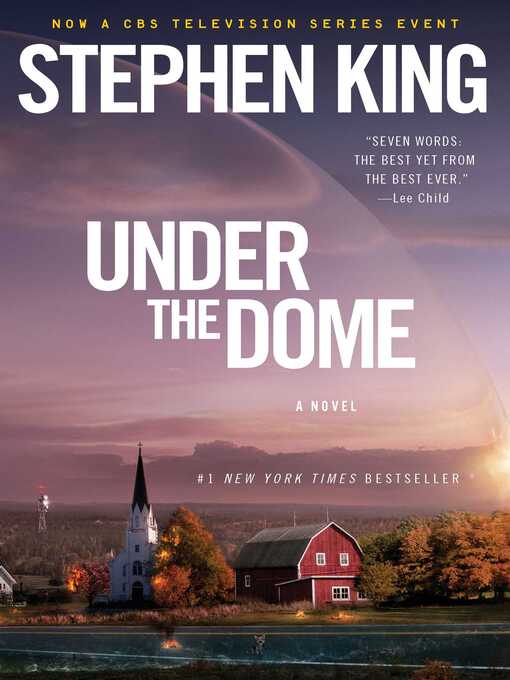 On an entirely normal, beautiful fall day in Chester's Mill, Maine, the town is inexplicably and suddenly sealed off from the rest of the world by an invisible force field. Planes crash into it and fall from the sky in flaming wreckage, a gardener's hand is severed as "the dome" comes down on it, people running errands in the neighboring town are divided from their families, and cars explode on impact. No one can fathom what this barrier is, where it came from, and when -- or if -- it will go away.

Dale Barbara, Iraq vet and now a short-order cook, finds himself teamed with a few intrepid citizens -- town newspaper owner Julia Shumway, a physician's assistant at the hospital, a select-woman, and three brave kids. Against them stands Big Jim Rennie, a politician who will stop at nothing -- even murder -- to hold the reins of power, and his son, who is keeping a horrible secret in a dark pantry. But their main adversary is the Dome itself. Because time isn't just short. It's running out.

Voyeuristic in psychopathic behavior, but little drives this plot that drones on and on and on. At 500 pages, I decided I had to finish. Believe me, it's not worth the effort! What a disappointment.

I need more time to read this book; unable to add more time tried to renew I need a little more time.

It’s time for another Stephen King book! This is the inspiration (and I use that loosely) for the TV series of the same name from a few years back. Reading this review will tell you absolutely nothing about the series, but if you want to know more about that you can check https://io9.gizmodo.com/the-season-finale-of-under-the-dome-recapped-by-the-do-1340612358 for an index of hilarious recaps written from the point of view of the eponymous Dome.

King opens with a highway leading into Yet Another Maine Town (this one, as with the others, located not far from Castle Rock). Abruptly an invisible, barely-penetrable-by-gases hemisphere slams down over the town, with the predictable car accidents the first human casualties. The town of Chester's Mill is in trouble, naturally, and the usual separation of the baddies and the good folk is set in motion. In this case, the baddies are led by Big Jim Rennie, owner of the auto dealership from out of town, his son, one of the other members of the town selectmen, and a deeply crazed meth addict. The good guys are led by a former soldier called Barbie, the town doctor, the town’s newspaper publisher and a very smart group of high school kids.

The power lines and phone lines to the town are cut by the Dome, but at first cell phone signals and wireless can get through. (As an amateur radio operator myself, I think King missed a chance here by not having one in town, but oh well!) The government soon jams the signals, creating the isolation in which awful people thrive. Big Jim is the stereotypical horrible person masquerading as an elder of an evangelical church, and he sees this as a chance to make everyone in town, including those who have opposed him, kiss his boots.

Barbie is on his way out of town when the Dome appears, since he had gotten into a fight with Big Jim’s son’s buddies. The Dome prevents him leaving, but sticking around provides a ready source of conflict. Human danger is soon joined by environmental danger, as the air begins to get more and more stale and polluted. And that meth addict’s drug-induced psychosis is coming to a head.

It’s a wonderful read of a potboiler, and if you enjoy King’s typical fare you’ll like this. The ending is perhaps more than a little deus ex machina, but that won’t deter most King fans. It didn’t deter me. Four of five stars, with the caveat that opinions on this may vary wildly depending on whether you’re one of those King fans or not.

This was a complete story with twists and turns. It had a very satisfying ending. Great job again, Mr King!

I really loved the book. First of all, I really liked the concept of the book. It is also a typical Stephen King novel, clearly the novel has much more details than the TV shows. However, I think the book is way too long.

Despite the length of this book, I stayed hooked the whole time. First time reading a Stephen King book for me, so not sure how it compares to his usual books, but I found the small town atmosphere and the characters to be really well done. Worth a read!

Loved it. Even with terrible the ending and lame explanation of the event is ok, since King does do those things pretty predictably.

Concept was indeed brilliant. Character building was similar to that of King's popular novel "The Stand". I was disappointed in how all that character building seemed to be almost for nothing. The climax seemed rushed and poorly concluded. I would have liked for all the build up to have been been better tied together, thus leaving a more mysterious set of conclusions.

Brilliant concept, action packed, and hard to put down. Surprised at the ending and a bit disappointed

I have been a Stephen King fan for over twenty years. I found that this book was another great read from him. The story focuses on the characters struggles with the isolation and the fear that set in after a dome encases the town. It is interesting to see when situations become serious, how the true natures of individuals come out.

007Gatsby thinks this title is suitable for All Ages

GinaMWright thinks this title is suitable for 18 years and over

smmallory2012 thinks this title is suitable for 15 years and over

Bazooka_B9 thinks this title is suitable for 17 years and over

Mavis82 thinks this title is suitable for 15 years and over

fairbae thinks this title is suitable for 17 years and over

bookfanatic01 thinks this title is suitable for 14 years and over

Sexual Content: Lots of talk about sex and sex happening.

Frightening or Intense Scenes: The entire book is intense.

"They walked back into the world together, wearing the gift that had been given them: just life."

There are no summaries for this title yet.

Find it at BPL