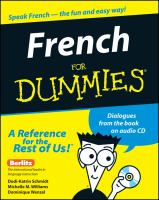 If you buy into the Pepé Le Pew stereotype of the French - arrogant, stuffy, overly amorous, and rather odiferous (Pepé Le Pew was a skunk. Talk about stereotypical!) - then think again. Not only are the French people some of the most relaxed, pleasant people you'll ever meet, but their society is one of the oldest, most culturally rich societies in the world. So it's no surprise that French is known as perhaps the most beautiful of all languages. Listen to someone speak French - sure, you don't have a clue what she's saying, but aren't you enraptured by the sound of it?

Unfortunately, just because a language is beautiful doesn't mean that it's easy to learn. Although French has many things in common with English, French has had many, many centuries to evolve into the language it is today, which means it's had all that time to become more complex. That's where French For Dummies can help. Written in partnership with the language experts at Berlitz, this book can give you what you need for basic communication in French.

French For Dummies covers the following topics and more:

Basic pronunciation and gestures The nuts and bolts of French grammar Meeting and greeting in French Situations in which you can use French: Making small talk, dining out, shopping, and talking on the phone Traveling to France: Dealing with French currency, staying at a hotel, and getting around town Top Ten lists on ways to pick up French quickly, things you should never say in French, favorite French expressions, and important French holidays to remember. Appendixes with verb conjugation tables, as well as a French mini-dictionary

French For Dummies also comes with a CD that has audio transcriptions of all the exercises in the book, so that you can actually hear the French pronunciations.

So whether you're taking a business trip and need to pick up a little French quickly; you're cramming for your high school French final; or you've always wanted to learn a new language but don't have the time to drag yourself to a class once a week, French For Dummies can get you well on your way to becoming fluent in no time.

There are no comments for this title yet.

There are no ages for this title yet.

There are no summaries for this title yet.

There are no notices for this title yet.

There are no quotes for this title yet.

Find it at BPL