Jessy Wheeler
Boston Public Library
Staff-created list
Acadians descend from French colonists that settled in Acadia in the 17th and 18th centuries. Some may also be descended from the native people that lived in the region. Acadia was comprised of what is now Nova Scotia, New Brunswick, Prince Edward Island, part of Quebec, and Maine to the Kennebec River. Nearly 12,000 Acadians were expelled from the region during the French & Indian War, due to British fears that they were loyal to France. Many were recruited by Spain to re-settle in what is now Louisiana. Their descendants, the Cajuns, established a culture that still thrives today.
By: 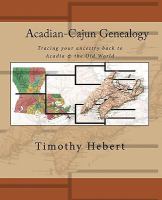 Acadian-Cajun Genealogy
Tracing your Ancestry Back to Acadia & the Old World
by Hebert, Timothy

Acadian Descendants
by Jehn, Janet B.

Acadian Exiles in the Colonies
by Jehn, Janet B.